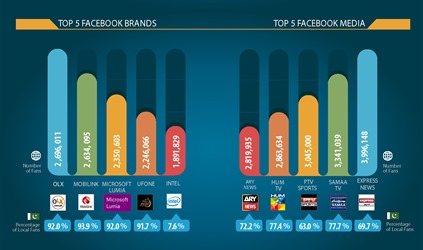 April 2015 was full of unexpected weather fluctuations – putting a damper on picnic plans and outdoor activities with spring showers and unexpected heat waves. On facebook most businesses were recovering from the annual ‘fake-fan’ purge and only opted for the promotion of new products rather than exciting campaigns.

The twitter brands with the largest audience are Mobilink with 313k followers, Warid with 249k followers and ufone with 204k followers. However when it comes to fastest growing profiles – we see a slight difference as the top three in the limelight this month have been Pepsi Pakistan, Mobilink and Warid as they gained 8,305, 7,053 and 7,027 new followers this month. The high number of new followers for Pepsi Pakistan this month were due to their latest video advertisement which was heavily shared by their many fans.

On facebook the beverages and FMCG industry has taken the lead with some interesting campaigns. MilkPak Cream stole the spotlight with the highest engagement rating of 45.11% which is mainly due to their "#IMadeIt" campaign. After months of sharing exciting recipes they are now encouraging fans to share pictures of their own creations using MilkPak Cream to get the chance to win exciting prizes.

Second highest engagement is by Nesfruta (15.31%) due to a large amount of activity based on their university and college campus drive. They gave the chance to their fans on the drive to send in selfies to win a Smartphone.

Third highest engagement rating was of Nestle Fruita Vitals (3.98%) due to the hype generated around the launch of their latest flavor – Kinnow Nectar. Fourth highest was held by Chester Bernard (3.72%) due to their quick response service of user queries regarding their online store while fifth highest engagement rating was of Anhaar Milk (3.20%) because of the launch of their new flavored milk.

This month saw a lot of interesting engaging strategies applied by different businesses the ones that stood out the most was the dish creation contest held by MilkPak Cream with the hashtag and title "#IMadeIt and interesting video advertisement by Pepsi Pakistan. This shows that any new business can capture audiences if their campaign is engaging enough or if their videos become viral.

« PAS Partnered with Mediaconcepts to Promote Legal Content in Pakistan