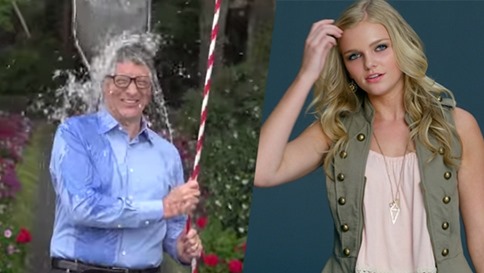 The Ice Bucket Challenge and the "Like a Girl" campaign received the top Facebook honors in marketing.

The Ice Bucket Challenge was the past year’s best use of Facebook marketing, according to the social network, which just announced its ad award winners. It’s no surprise the viral campaign got so much praise—Mark Zuckerberg even participated.

Zuckerberg was one of the millions of people to douse themselves in ice water to raise awareness for ALS in what became a powerful moment for online marketing. The best part was that it cost the ALS Association no money to generate all that attention—440 million people saw the videos.

The lesson was not lost on Facebook, which is holding it up as an example of how to use the platform for maximum impact.

This year marked the fourth Facebook Awards, which are timed to coincide with the Cannes Lions International Festival of Creativity—where the ad world assembles to honor its top creative work.

This year, award entries came from twice as many countries—more than 160—as last year, according to the company.

It also was the first year Facebook included winners with Instagram ad campaigns, and video was a core piece of the ad mix, as well.

"The two big things were mobile—people building for where people are—and the other was video," said Mark D’Arcy, chief creative officer of the Facebook Creative Shop. "Seventy percent of submissions this year involved video as an essential component of how they were building a brand story."

Facebook pulled in $12.5 billion in ad revenue in 2014, and mobile ad sales now makes up more than 70 percent of the business. Instagram is just starting to scale.

"The question I get more than any other is, ‘What is the single best ad on Facebook?’" D’Arcy said. "And the answer is as diverse as the people on Facebook."

Brands, agencies and marketers are using Facebook in ways that can switch up creative depending on the audience, tailoring the promotion based on a consumer’s interests, background and geography. D’Arcy calls it the science of building relevance.

Here’s a look at the top 12 campaigns from the last year—the winners that took home blue, gold and silver honors: (The other winners and notable campaigns can be found here.)

In the summer of 2014, people living with ALS raised awareness of the condition by having people all over the world dump buckets of ice water over their heads and post videos of it, issuing a challenge to the next person to do the same.

Results: 17 million videos from 159 countries, including ones made by Will Smith, Bill Gates, Oprah Winfrey and Mark Zuckerberg, generated 70 billion video views and raised $220 million. Zero dollars were spent to promote the challenge, and 440 million people saw it.

With the hashtag #LikeAGirl, the Always feminine-hygiene brand confronted gender norms by asking people to change their perception of what it means to "act like a girl." The videos spread all over social media, showing young kids giving positive representations of how to run, throw and punch like a girl.

Results: Emotional connection rose from 38 percent to 41 percent. Ad recall from people who saw the ads was 47 percent, and brand linkage was 59 percent. It was the most watched video in Procter & Gamble history with 76 million views globally. Top-of-mind awareness from the campaign’s target audience rose 9 percentage points to 58 percent. Earned impressions hit 250 million. Purchase intent among teens rose from 40 percent to 60 percent.

This overseas airline put mistletoe on its planes and encouraged people on the ground all over the world to track the flights and kiss when they were overhead. Facebook ads were targeted at people in different cities when planes were en route.

Results: Campaign credited with contributing more than $300,000 worth of free media thanks to the attention from blogs, and likes and shares on Facebook.

Going after a digitally savvy audience, Kia created a car racing video game in which players built their own virtual racetracks. By gesturing in the air with their phones, the game would translate the motion into a customized course.

Goals: Drive awareness; Promote the pro_cee’d GT car and have people share their racetrack creations with friends on Facebook.

This campaign for a women’s rights group supported legislation in Lebanon to protect women from domestic violence. Its "red thumb" became a symbol of the cause with people all over the world showing support by showing a thumbs-up dipped in red ink.

A large X-ray installation set up for public viewing showed couples dancing, hugging, kissing and otherwise interacting. Then they would reveal the people behind the skeletal images seen by the crowd. The point was to confront bias by showing most differences are only skin deep.

Results: 40 million views in two days, and the second-most viral PSA in history.

I Will What I Want
UnderArmour
Droga5
Award category: Integrated (gold)

This sportswear brand tried to broaden its appeal among women with a social campaign starring Misty Copeland, the ballerina, and Gisele Bundchen. They created videos featuring the women and invited the masses to comment, messages that were then used in the campaign, as well.

Results: 5 billion media impressions and $35 million in free media with a 42 percent boost in traffic to UA.com. Under Armour Women’s sales lifted 28 percent.

This beer company came up with a way to get into the Super Bowl marketing act yet again without buying ad space. It looked to crowdfund a commercial with 30 or so like-minded brands, which would each be featured very briefly in the video. The ad ran on Facebook and in one market during the game.

A.1. Original Sauce wanted to friend other foods so it created a Facebook campaign that showed it was in a relationship with Steak but could connect with other meats like Pork. The point was to show people that the sauce was more versatile than its name implies.

Looking for a younger audience for its GLA, Mercedes launched a campaign that let people customize a car right on Instagram. It also promoted a video to a target audience on Facebook.

The beer brand targeted people with friends in Denver and Chicago with a promotion to buy a friend a beer with a redeemable receipt at a local bar.

Goals: Awareness, preference and intent, drive traffic online and off, and sales.

Results: 23 million earned media impressions and a threefold in-bar sales lift from consumers who spent more than the value of the first beer when redeeming their coupon.

The whisky maker challenged a pessimistic country, Lebanon, to share more hopeful messages on social media, and a fire-writing calligrapher was photographed recreating the posts from the people. They used the hashtag #KeepWalkingLebanon.

The 6 Rules for #DataDriven Social Marketers »
Become a Contributor