A snapshot of the Radio Industry – September, 2014. Find out who’s leading the industry with radio campaigns? Who’s getting the best return from radio?

RADIO INDUSTRY REPORT gives the overall picture of advertising on RADIO during the month of September, 2014. It covers top advertisers, categories, brands and FM Channels and their % share in total advertising in terms of minutes. The report also focuses on share of FM channels, share of each genre and ad-spend split over the time slots. 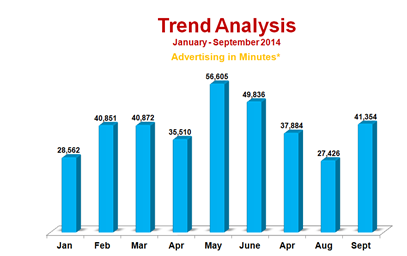 – The trend of total advertising spend in minutes from January to September indicates highest in May followed by June. Compared to August, the advertising minutes spend on radio increased by almost 50% in September.

– The top three categories that advertised heavily on Radio include Telecom, Detergents and Websites with a collective share of 32%.

– The total advertising spend share of radio increased by 63% in September 2014 compared to August.

– The top advertisers remained Unilever and Telenor with a cumulative share of 24%.

– Looking at brands, interestingly OLX that stood at number 9 position has moved up to number 2. The other top brands were Surf Excel and Telenor. 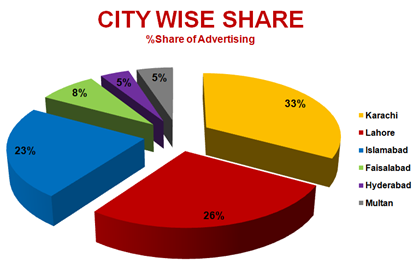 – Karachi, Lahore and Islamabad enjoyed the highest share of advertising at 82%.