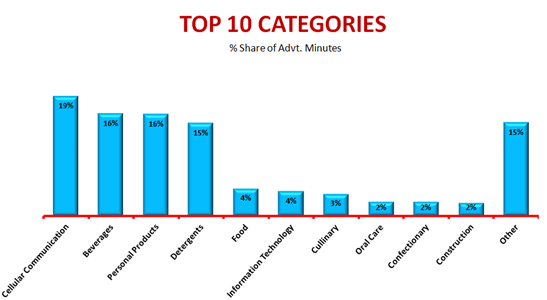 · The most popular category on TV remains Cellular Communication followed by Beverages and Personal Care. These three top categories share accumulates to 51% of the total share of advertising minutes on TV. The other strong category is Detergents (15%) followed by food (9%) including culinary and confectionery.

· Compared to September 2013, the spending trend of advertising minutes remained the same with Cellular Communication, Beverages and Detergents on the top with accumulated share of 43%.

· Construction that enjoyed a share of 10% last year in September now stands at 2% this year. 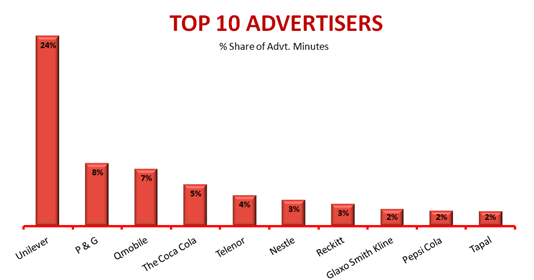 · Top 10 advertisers on TV that represent 60% of the total advertising share include Unilever at a staggering 24% followed by P&G at 8% and Q Mobile at 7% respectively.

· In September 2013, Unilever, P&G and Pepsi Cola remained on top with a cumulative share of 24%. Unilever alone had only 9% share last year, which has increased by nearly 63% this year. 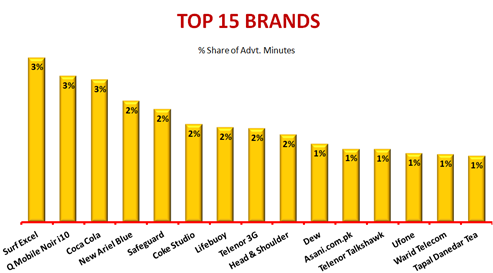 · The top three brands that advertised heavily in the month of September 14 on TV include Surf Excel, Q Mobile and Coca Cola.

· Interestingly Pepsi Cola that stands at ninth position with a share of just 2% this year had a strong presence on TV during September 2013 with a share of 7%. Coca Cola on the other hand had a very low share last September (1%).

· Liaqat Hospital was the top brand last year in September followed by Pepsi and Ufone. 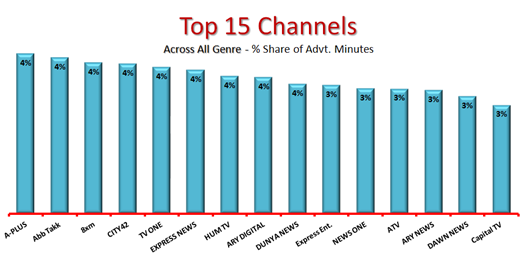 · The channels that enjoyed the highest advertising include A-PLUS, Abb Takk and 8xm with a cumulative share of 16%.

· City 42, Geo News and ATV were the top channels last year with cumulative share of 10%.

· Channel Abb Takk that stands at number two this year, was not present last year.