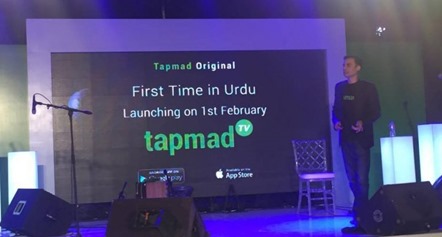 The app comes with over a 100 local and international channels, so you can stream your favourite dramas, movies and TV shows.

Tapmad TV, a free Android and iOS application was launched on Thursday, which has a variety of features including live streaming channels, recording and catch-up programmers, digital video recording, rewind and other features.

The application was launched at Alliance Francaise, Karachi on Thursday and a large number of publishers of different digital applications; bloggers, social media activists and advertisers were present at the launching ceremony.

The app comes with over 100 local and international channels, so you can stream your favourite dramas, movies and TV shows.

Addressing the ceremony, Tapmad CEO Yasir Pasha said that this new digital application will cater to all age groups and will fulfil their requirements, such as it provides movies where one can download and search for their favourite films as well.

"Beside news, this application has also space for food channels, sports and music," Pasha said. "Through Tapmad TV, we wanted to bridge the entertainment gap for the younger lot who is always on the go," he added. The extension of the app is an HDTV box which can be connected with TV through HDMI cable or projectors for a better fun-filled experience. "We understand that some people prefer big screens for their entertainment needs, which is why the HDTV box was a necessity."

This new state of modern application will also provide space even for television channels to run a channel’s live streaming. The app can be downloaded for free from the App Store or Google Play.

"So every time you have entertainment cravings, or need to update yourselves, tap on your screens to open a world of madness," Pasha added.