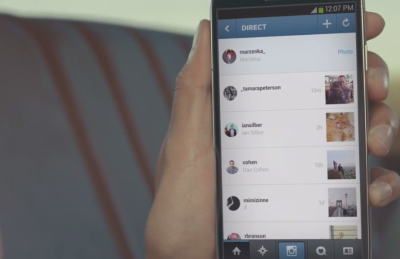 Instagram announced that the photo-sharing service is introducing private photo-sharing and messaging. The feature is called Instagram Direct.
Instagram has always been a mostly public social network, with a broadcast structure instead of connections based on mutual friendship, like Facebook. The introduction of Instagram Direct marks a new phase for the company.
Now, users who follow each other will be able to send each other private chat-like messages, which can include photos or videos (of course). Previously, users have only been able to like or publicly comment on pictures.
Instagammers can not send text-only messages to each other, but must send pictures to start the chat function.
Users have had some options for privacy on the network, with the option to block certain users or mark your profile as private, which means you must accept follow requests.
But the move toward a more private, precious Instagram makes sense.
Messaging adds a new layer of engagement to the app. Users can now start up a conversation, which shouldn’t be difficult considering they’re watching their friends lives unfold in pictures.
Here’s a video preview: