Jaguar asked its media agency Mindshare to activate their 2015 sponsorship of the Wimbledon Championships. Mindshare wanted to be true to Jaguar’s brand values and reach out to their core audience. So they created an integrated social, website and out of home campaign that brought the emotion of Wimbledon to life, through unique real-time data.

Below, Chris Cardew, Mindshare’s joint Head of Strategy gives the inside story of how a social newsroom operates. 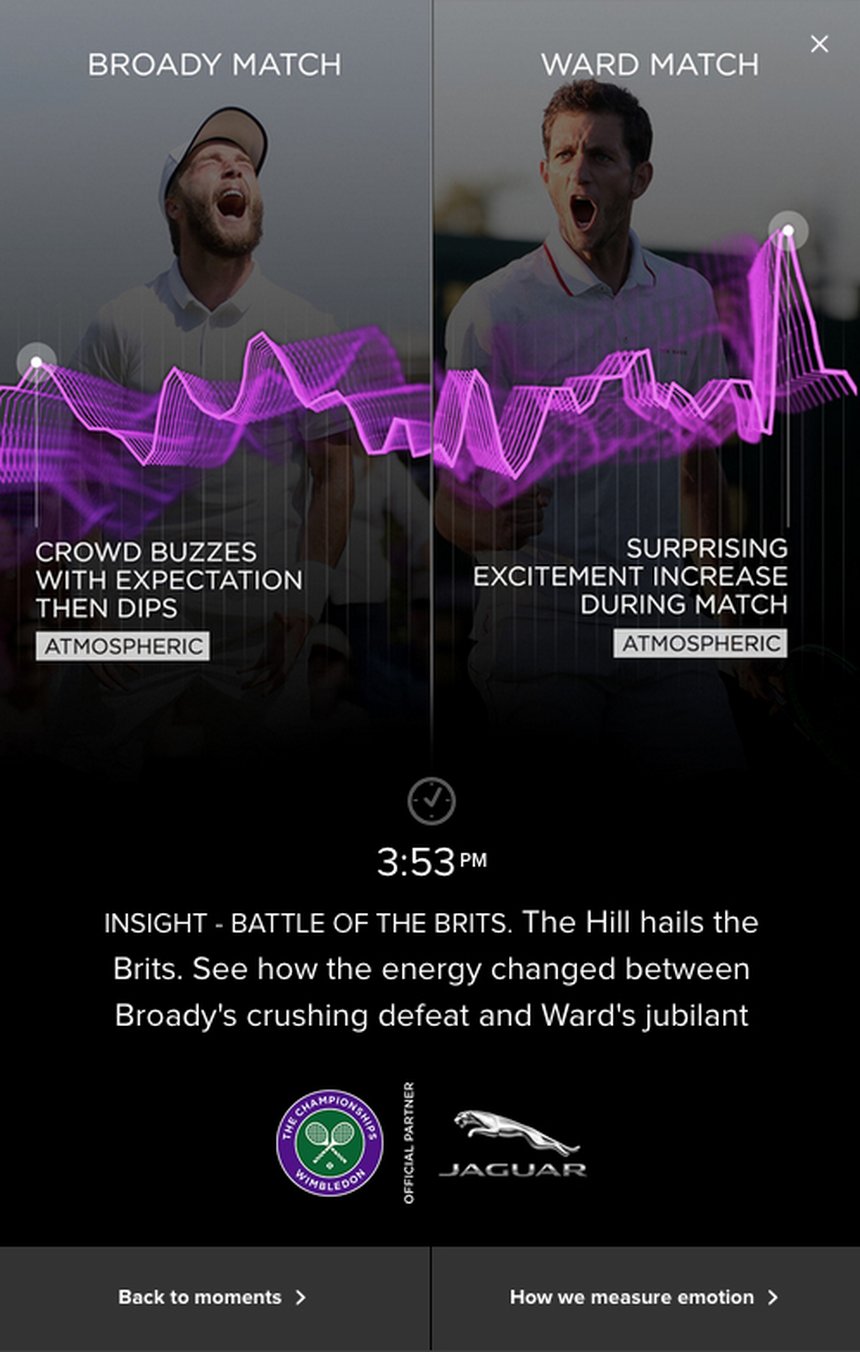 What was the brief from Jaguar?

Jaguar asked us how they could amplify their partnership with Wimbledon to help them with their long term objective of improving brand appeal in the UK. Our strategy was all about enabling Jaguar to own the feeling of Wimbledon, an as-yet untapped territory by other partner brands.

Our idea was Feel Wimbledon.

We wanted to capture that Wimbledon feeling for real, and share it in real time with tennis fans across the world, to give them more of what they love. 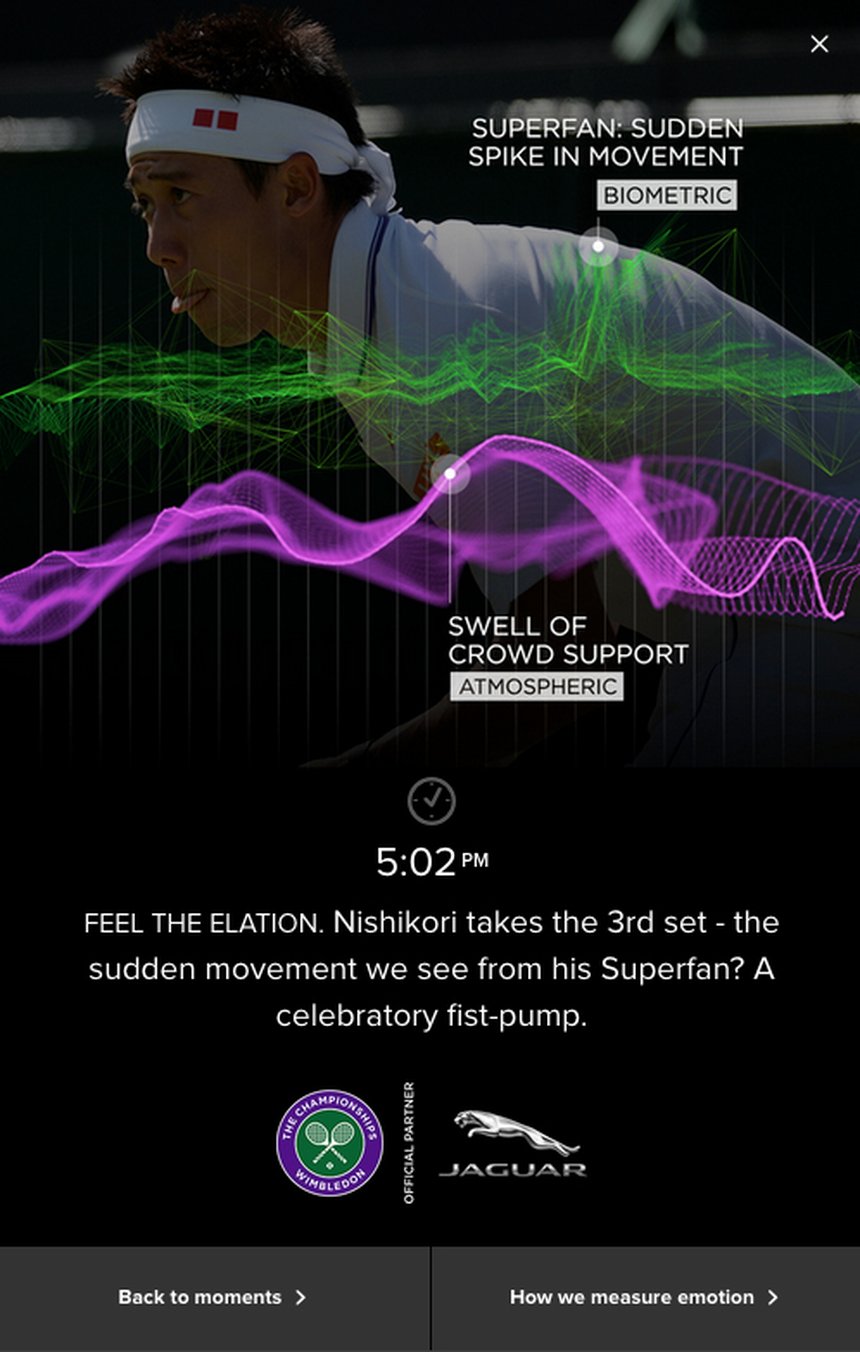 How does the social newsroom work?

We have been collecting the following data sets:

​Simon, our sports editor and tennis specialist is watching one of the main matches on the two courts. When something exciting happens – such as an amazing 30 stroke rally or 2 breaks of serve in a row – we decide it warrants communicating.

We know the fans will be feeling something in relation to those moments. We try and react to a moment every half an hour.

We always make sure the data validates what people are feeling in that moment. So we look for heart rate variability in a tense rally, or crowd noise and movement in response to an amazing trick shot.

We always hypothesise the feeling and then use the data to validate it – so ‘feel the shock’ will be explained by a sudden drop in heart rate and total silence and lack of crowd movement on court.

Then the data is visualised and uploaded to a bespoke CMS where it can be accessed by the whole team for website, social and digital outdoor content creation.

Two web designers take the data visualisation, annotate it, lay it onto a supporting image, and a copywriter then writes the story. It is then uploaded, via the CMS, to www.feelwimbledon.com. This happens within about 15 minutes of the tennis moment happening. On average we are creating 24 pieces of content for our website per day.

The same data visualisation is then used for a digital animation which is displayed in outdoor sites. A digital designer embeds the data into a pre-created template and then it is served to a national network of digital screens at sites including Piccadilly Circus and Canary Wharf. On average we are creating 14 different OOH ads each day.

We’re using social to surface the best real time moments and ‘longer view’ insights. For example, after a match has finished, we will pull the biometric data from our 20 people wearing wearables and show how heart rates shifted across the match, highlighting the key moments in the game and showing how they two marry up. These pieces have had great engagement rates. 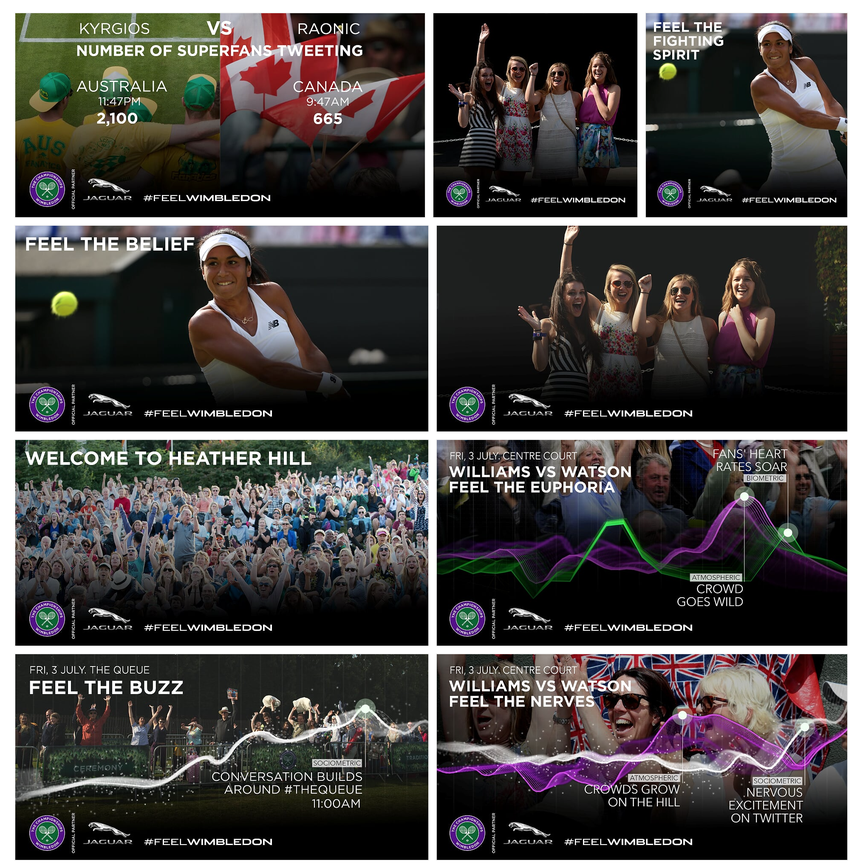 What has been a highlight?

The Heather Watson v Serena Williams match on the first Friday was a real highlight.

With a local underdog giving the the world number one a run for her money we were getting brilliant data reads from all three sources. The energy was super high which meant we had great stories to tell. The world was engaged on social media so our real-time content was super relevant, meaning we achieved fantastic engagement rates, including a retweet from Heather Watson herself. 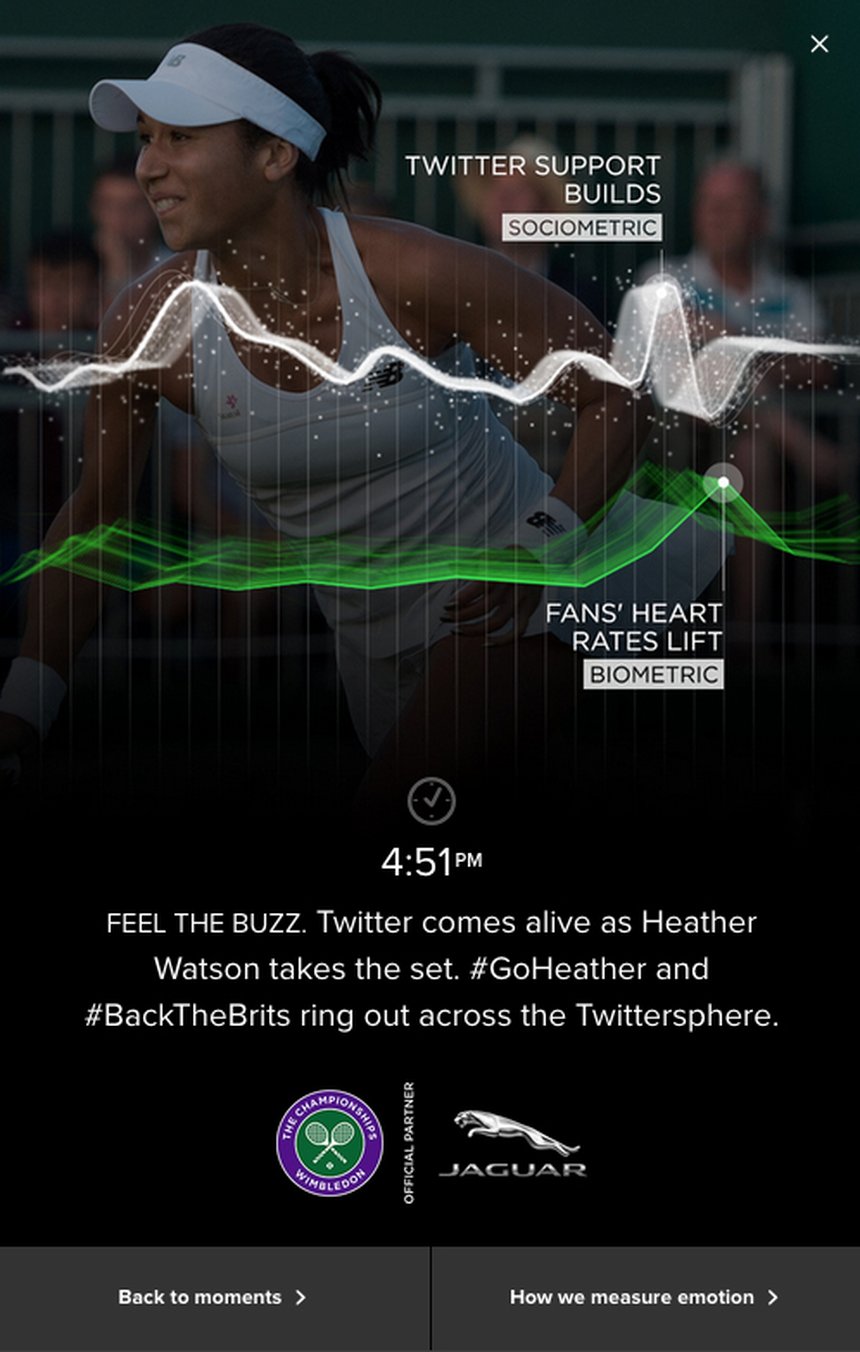 What have you learned?

Where to begin, there are so many learnings in terms of what the data has told us, but also how to effectively run a live newsroom for two weeks, with 24 people, 12 hours a day!

Bringing experts from different fields together really makes magic happen; you need specialists to guarantee quality of output. We have tennis experts, data analysts, data designers, web designers, ATL designers, copywriters, social designers, media buyers, and social media managers all working together. No one role can be done by the other, and as a result of bringing everyone together in one room, we’ve been able to achieve what we thought was the impossible.

What do you think the future is for this type of campaign?

Real time campaigns will become more and more commonplace. With live sport specifically you have to communicate in the moment, you have to hit people when they are feeling the energy and emotion of the game, and be part of that feeling.

In the future it will be easier. Technology will evolve meaning more types of data can be accessed quicker. The ways in which we can paint with the data and design it will open up too. And with more media like digital outdoor being able to be turned on in real time, we can expect to get content out to audiences in more places, faster.