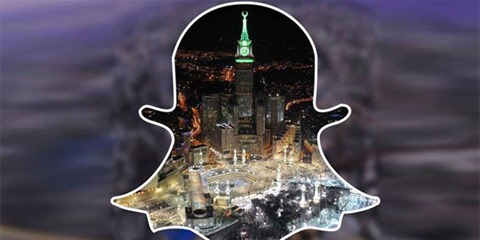 #Mecca deserves to be seen by the whole world.

Snapchat has honored the holy day of Laylat Ul Qadr through a dedicated live feed for Mecca. On Monday, people could scroll down to their ‘Stories’, navigate to the ‘Live’ feed and see the Holy City in all its glory.

Thousands circle Mecca’s iconic Kaaba, pose for photos on the balconies above the Al-Masjid mosque, pray and read from the Quran, break their fast with sweet dates and rice and speak into the camera to describe the feeling of being in the midst of such a sacred gathering.

Snapchat launched its Live section in August 2014 as a way of letting users create and view public photos and videos taken at the same live event. The social media application requires users to turn on location services in order to verify that they are truly where they say they are. As with other photos and videos on Snapchat, those available in the Live section disappear after a short period of time.

Thousands of Muslims and non Muslims around the world took to Twitter over the weekend using the hashtag #Mecca_live to petition Snapchat to include Mecca in its Live section.

White, black, rich, poor, Asian, African or European, all in one place side by side praying to one God. Blessed to be Muslim🙏🏻 #mecca_live

The amount of love I've been exposed to since I've expressed my feelings on #mecca_live is overwhelming. Islam is so loving and accepting💗💗

Over 2 million people attending a 10 minute prayer. They come in peace and go in peace #mecca_live pic.twitter.com/RlJsCjDUog

I'm not Muslim, but thank you, @Snapchat for opening my eyes to how beautiful and captivating the world of Islam truly is. #mecca_live

#mecca_live @Snapchat @snapchatsupport please don't let us down. Makkah deserves to be seen by the world. 💙 pic.twitter.com/wytT8r1rxo

Here you are .. this is the place where we want #mecca_live to be all about on July 13th ! @Snapchat #snapchat pic.twitter.com/jyJEQHBZQq