Continuing the ongoing series of studies into digital usage around the world, today We are Social delighted to bring you the latest report: Digital, Social & Mobile in APAC in 2015.

To help marketers keep track of these impressive numbers – and understand what they mean for their brands – We Are Social has teamed up with the IAB in Singapore to bring you an in-depth study of digital in the world’s most populous region, including deep-dive analyses for 30 of the region’s key markets.

So what do the report’s 323 pages reveal?

Well over one-third of APAC’s population now uses the internet, and more than one-quarter have used social media in the past 30 days.

Mobile continues its dramatic rise too, with the number of cellular connections in the region growing by more than 11% since our 2014 APAC report.

Mobile social is the hottest digital trend in APAC at the moment though, with the number of people in the region accessing social media from mobile devices jumping an impressive 32% in the past year, to reach 900 million. Current trends suggest that mobile social users will exceed 1 billion by early Q4 2015.

Let’s start by taking a quick look at some fresh updates to the global picture, before diving into a more detailed analysis of each key area of the digital landscape in APAC.

Data published since our global report in January show that the number of global internet users grew by 28 million in the past two months alone, although it’s important to stress that this is more likely due to more accurate and timely reporting than it is to do with growth in actual users.

People are doing more on the internet too, with video in particular seeing an impressive share of online activity:

The reported number of active social media accounts on the largest social network in each country shot up by more than 47 million since January too, with all of that growth attributable to Facebook (Tencent will report the latest numbers for China’s QZone, QQ and WeChat later this month).

These increases in Facebook use may be driven by the return of lapsed users as much as by new account sign-ups, but Facebook will still be pleased with growth of close to 10 additional active accounts every second since our global report.

We’ve seen some impressive jumps in the number of active users reported for some other top social platforms too, with WhatsApp (+100 million), Baidu Tieba (+100 million) and Viber (+27 million) all reporting significantly higher global numbers since January.

However, based on a number of reports on Google+ in recent weeks – including Google’s own announcement that it plans to make some significant changes to the service – we’ve revised the number of active users down by 43 million:

People are doing more with their social media time too, with the number of video views on Facebook and the number of messages shared on WhatsApp both showing some impressive growth in recent months:

GSMA Intelligence also reports impressive growth in the number of unique mobile phone users, with the global tally up by 30 million in the past two months.

Current global trends suggest that roughly half a million people gain access to a mobile handset every day.

The Internet In APAC
Asia’s population reached an important milestone in 2014, passing 4 billion people for the first time. However, the region’s digital population is growing much faster, with internet users growing almost four times faster than the general population.

As compared to last year Internet penetration has increased in Pakistan and it’s now at 15%. However, internet penetration remains below 10% in Timor-Leste (1%), Myanmar (5%) and Papua New Guinea (6%), while data suggests that fewer than 10,000 people in North Korea – or 0.003% of the country’s population – has access to the internet as we know it:

The most significant changes in internet usage came in Cambodia and Myanmar, where the reported number of users grew by 414% and 346% respectively, while Papua New Guinea  also saw impressive growth of 193%. Growth of Internet users in Pakistan has also increased, as we mentioned above though, this growth is likely due to more accurate reporting, rather than because all those people suddenly started using the internet in the past year:

The accuracy of internet user data in APAC continues to be a cause for concern though, with the most recent ‘official’ data for many developing countries often 2 to 3 years old.

Alarmingly, the number of internet users reported by official sources for Indonesia hasn’t changed since last year’s report, meaning that actual penetration in the country may be considerably higher.

If we use the growth in social media users as a reliable proxy*, the number of internet users in Indon
esia likely rose by around 20% in the past year, suggesting actual user numbers may be closer to 87 million.

* Note: social media user data is much easier to find, as it typically comes from single sources that have a commercial incentive to report accurate user numbers for advertising purposes. For this reason, the reported number of active social media accounts in developing countries can be far larger than the number of reported internet users, as is the case for a number of countries in this year’s report.

Internet users in Southeast Asia are amongst the most active in the world, with GlobalWebIndex reporting that average users in The Philippines, Thailand, Vietnam, Indonesia and Malaysia all spend more than 5 hours each day using the net.

Conversely – and perhaps somewhat surprisingly – internet users in Japan, South Korea and Hong Kong are all less active than the average user in GlobalWebIndex’s global survey, spending less than 3.5 hours per day on the net each day (compared to the average of 4.4 hours):

On the whole, the demographic profile of APAC’s internet users skews younger, with comScore finding that 61% of all users below the age of 35. The company also find that men are more active on the internet than women, accounting for more than 55% of all users:

When it comes to access devices, internet use in APAC is an increasingly mobile affair, with a significant number of the region’s users now mobile-only.

When it comes to the overall volume of internet traffic, however, personal computers still dominate, accounting for around 53% of all web pages served in the region:

E-commerce is on the rise too, with GlobalWebIndex data suggesting that more than half of the national populations of South Korea, Taiwan and Australia bought something online in the past month:

However, now that Amazon has its own store on Alibaba in China, the next few months could some some interesting developments in APAC’s e-commerce scene.

Social media users in APAC grew by more than 47 million since January, with some huge gains in individual countries.

India recorded the largest absolute growth, up 6 million active Facebook accounts (+5%) to 124 million at the time of writing.

The Philippines and Indonesia also added 2 million active Facebook accounts each since January, with the platform’s total audiences in those countries up 5% and 3% respectively.

Well over one-quarter of the region’s population now uses social media each month, although this usage is very unevenly distributed.

APAC is home to the world’s most socially active country – data from Facebook suggests that more than 90% of Singapore’s population used the platform in the past 30 days – but 21 countries around the region still have social media penetration levels below 10%, including 3 of the region’s most populous nations: India, Bangladesh, and Myanmar:

However, there’s plenty to be excited about, with active social media use growing by more than 12% in the past 14 months. This growth takes the region’s active user total well past the 1 billion mark, with regional penetration of 27%:

There’s still plenty of room for growth, too, and analysis of the current social media user base shows that many important demographic groups are still under-represented.

As with other areas of this year’s report though, the penetration of mobile social media isn’t even across the region. Singapore leads the way at 87% – almost 4 times the regional average – but North Korea and Papua New Guinea both register less than 5%.

Pakistan, India, Bangladesh and Myanmar lag too, with data showing that mobile social penetration is still below 10% in these key countries:

However, growth in low-penetration countries has been particularly impressive over the past year, with Myanmar (+204%), Bangladesh (+132%), and Pakistan (+113%) all showing triple-digit growth.

Mobile Phone Usage In APAC
The number of mobile connections in APAC is rapidly approaching the same number as the region’s population, although as we reveal in the global section at the start of this year’s report, the average mobile phone user still maintains slightly fewer than 2 active mobile contracts; note that t
he following chart shows global data:

Our analysis of individual country data suggests that around 46% of APAC’s population currently uses a mobile phone, and current growth trends suggest that mobile phone penetration in APAC will pass 50% in just a few months, most likely around the end of Q3 2015.

Much of this growth is being driven by surging uptake in the region’s developing nations, with some of the region’s poorest nations showing the strongest growth in mobile phone usage over the past year.

The good news is that mobile broadband access is increasingly rapidly around APAC though, and roughly one-third of the region’s population now uses a 3G or 4G connection:

Alongside enabling richer content experiences, such access should also help to boost mobile commerce, which is already showing signs of taking hold around the region. 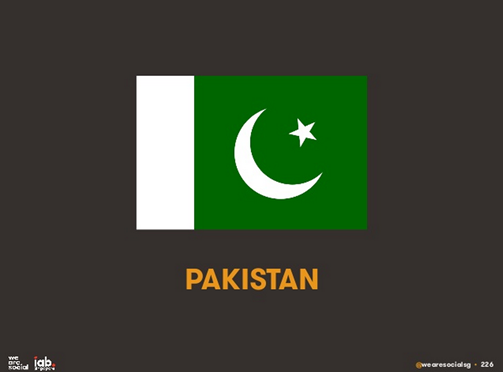 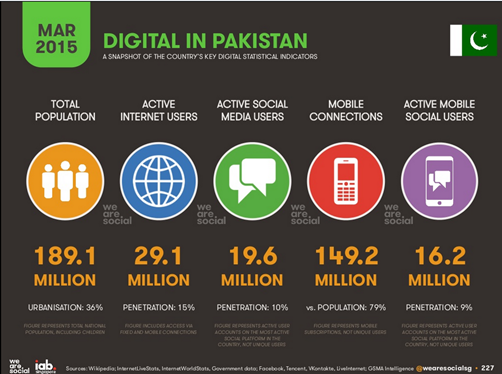 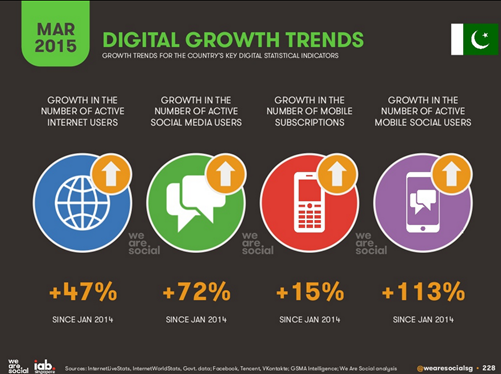 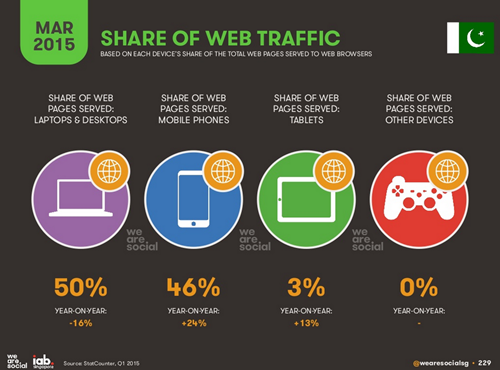 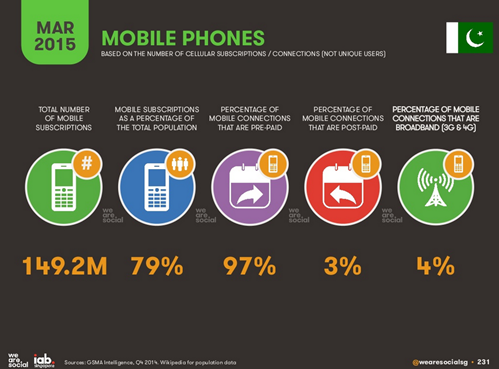