By Aamir Attaa
Revenues generated by Telecom operators in Pakistan in a single fiscal year reached all time high at Rs. 445.7 billion during 2012-13, said Pakistan Telecommunication Authority’s annual report on telecom industry.
Report said that revenues of telecom operators grew by 8.9 percent during 2012-13 and reached Rs. 445.7 billion, up from Rs. 409.2 billion during same duration previous year.
Report said that increasing revenues from the telecom sector indicate the strength and size of the market despite the economic difficulties and tough competition, especially in the cellular sector.
Moreover, revenues of LDI operators grew by over 200 percent, all thanks to ICH.
Telecom Revenues (Rs. in Billions) 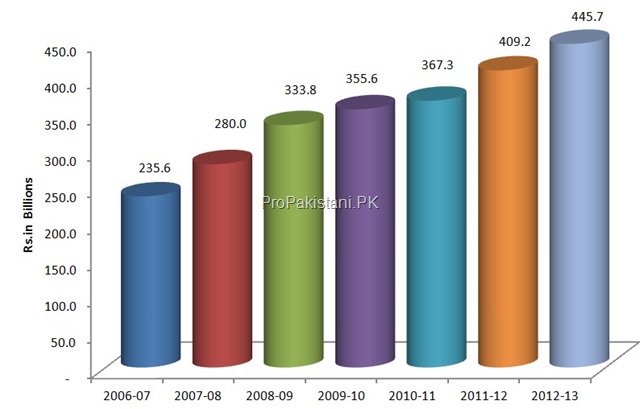 Not to mention, telecom operators are now exploring new avenues to earn from, reducing dependence on the voice channels alone. It is expected that influx of 3G technology into the telecom market will further boost the revenues of the sector.
Telecom Contribution to National Exchequer
Telecom sector is one of the highest contributors to the National Exchequer, putting Rs. 119 billion per year in the National Kitty on average for the last five years.
Despite growing cellular subscribers, increased traffic and higher taxes, the fiscal year 2012-13 saw lesser contribution to the National Exchequer from telecom sector i.e. Rs. 124 billion as compared to Rs. 133.41 billion deposited by telecom sector in FY2011-13.
General Sales Tax (GST) forms the major part of the contribution with Rs. 57.78 billion collected by FBR from telecom sector.
A huge sum of Rs. 53.52 billion has been paid by the telecom operators under various heads such as duties, withholding tax, fees etc.
PTA has also received Rs. 6.8 billion from the operators under various regulatory heads and deposited into the National Exchequer till March, 2013 while Rs. 7.52 billion was collected under the Activation Tax head. 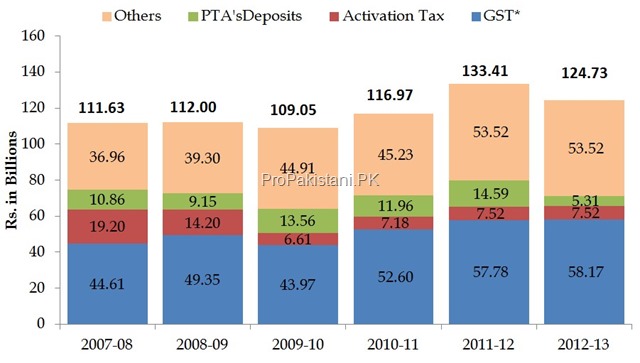 Despite the excellent growth in overall investment, Foreign Direct Investment (FDI) still remained on the negative side of the scale due to more capital outflows by companies than inflows.
The negative FDI of US $408 million during the FY 2012-13 can possibly be turned around by conducting further spectrum auctions such as 3G auction to introduce new technology in the country and resultantly bringing substantial foreign investment into the country.
For more details: ProPakistani.pk