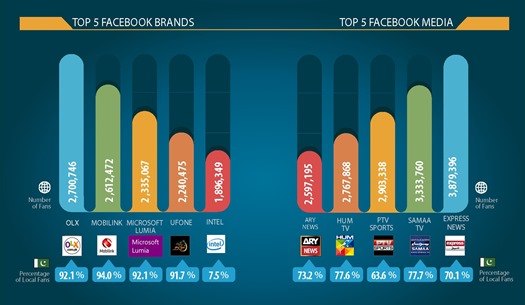 The month of March sees a drop in the fans count on all brands’ pages across Facebook due to its decision to purge inactive / dummy accounts. Some pages from Pakistan have seen a loss of up to 300,000 fans!

However, the netizens of Pakistan are making it clear they love fashion. The fashion pages of Facebook have consistently been ranking #1 by number of fans and this month too, in spite of losing 2 million fans, they are in the lead with more than 26 million followers.

Beauty can never be too far behind clothes and this month too this is proven true with the sector having than 19.5 million fans.

Behind them, the electronics, e-commerce and telecom round off the top five industries on Facebook, with 17.8 million, 16.7 and 15.1 million followers respectively.

Mobilink is once again at #2, with 2.6 million fans. Displacing Nokia at#3 this month is the Microsoft Lumia Pakistan page with 2.3 million fans. This could be due to the heavy advertising of the device itself on behalf of the manufacturers. Ufone and Intel round off the top 5 brands on Facebook for Pakistan at #4 and 5 with 2.2 million and 1.8 million fans respectively.

News channels are consistently ranking in the top 5 media pages on Facebook in Pakistan. Express News is first, with 3.8 million fans, Samaa is next with 3.3 million, PTV Sports has 2.9 million fans and HUM TV and ARY News come in at fourth and fifth places with 2.7 and 2.5 million fans each.

Engagement on the pages varies greatly by the campaigns run by different brands and where Vim was at #5 last month, it has jumped up to lead the others at #1 with 21.23% engagement rate. They ran very successful campaigns that gave away gift vouchers, Vim bottles and mobile balance to the winners.

The socially devoted laurels are again shared by the mobile operators. Zong has a response rate of 100%, with comments being responded to within 5 miutes. Ufone responded to 95% of the comments within 9 minutes, giving it the #2 position. Mobilink replied to 100% of it’s AMUQ as did Telenor, but where Mobilink replied within 6 minutes, it took Telenor 189 minutes to respond to the user questions posted on its page. Warid brings up #5 in the socially devoted brands on Facebook in Pakistan with a response rate of 98%, answered in 158 mniutes.

The top Facebook post came from Head & Shoulders Pakistan which had a very popular post featuring its brand ambassador Shahid Afridi in the ICC World Cup Quarter Final campaign. The second and third most popular posts in March were from Samsung Pakistan which featured the Samsung GALAXY A Series mobile phone.

The telecom industry takes the lead in most popular brands on Twitter as well. Mobilink, Warid and ufone are the three most popular brands and Telenor’s djuice, mobilink and Warid are the first, second and fifth fastest growing brands, while Lumia Pakistan and Brighto Paints are at #3 and 4 respectively.