Pakistan picks up 2 Golds and 3 Silvers in technology awards 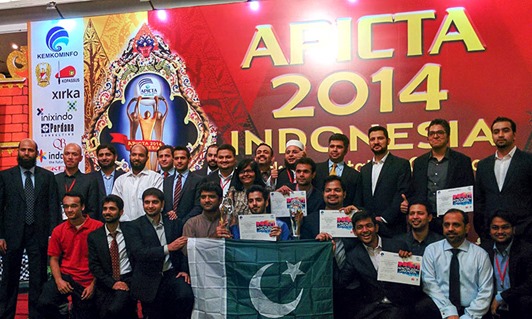 Leading the way with the Gold were the teams from Eyedeus Labs for their new product “Ingrain” and Syed Osama Maruf of NUST for his product “Smart Steth”.

The Silver Awards were taken by RemoteInterview.io in the Startup Category, EatOye in the Tourism & Hospitality Category and Fawad Ejaz Bhatti of NUST for TRex Tremor Reader in the Tertiary Student Category.

The Awards ceremony was attended by Indonesia’s Communications and Information Technology Minister, Rudiantara.

This year’s P@SHA delegation comprised of 30 members with19 technology products competing for the prestigious Awards.

National teams from each economy are selected after a rigorous ICT Awards competition in 17 economies.

The best of the best then compete against each other at a three day regional event judged by industry professionals, technology veterans and thought leaders from the Asia-Pacific region.

The Pakistani delegation was finalised after the announcement of winners at the PASHA ICT Awards earlier in November.

International APICTA Judges from 17 economies who evaluated the categories in which Pakistan participated spoke about the consistently high standard of technology products presented by Pakistan year after year.

This year Team Pakistan benchmarked its products against 183 products from the region.