Articles
Posted By PAS
September 9 2014
0
Home Knowledge Articles Marketers, if you want to make money on social media, go to…

Marketers, if you want to make money on social media, go to…

Tumblr. Yes, Tumblr. The blogging platform owned by Yahoo is already known for its particularly engaged users. This is translating into some serious money for retailers.

When it comes to mobile, Tumblr outpaced all other social networks in revenue per visit. "Pinterest is the one who everyone holds up as the retail social network but actually Tumblr is beating it by over three times," said Tamara Gaffney, principal analyst for Adobe Digital Index. 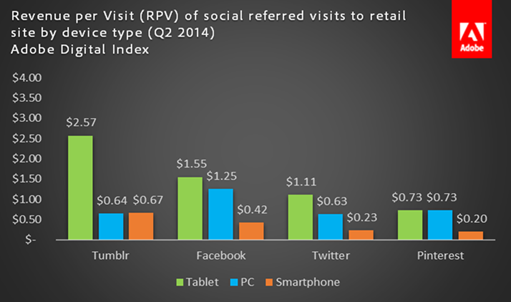 Demographics may play a role in Tumblr’s ability to drive users to retailers. Tumblr believes its users have a higher income than other social networks, Gaffney said.

Tumblr has slowly ramped up its ad strategy since the Yahoo acquisition last year, most recently with the introduction of native ads on Yahoo. But reports indicate this isn’t necessarily translating into more revenue for Yahoo.

It’s possible that advertising on Tumblr (which, by the way, users hate) is simply more difficult, though effective when executed well. But Gaffney said that many marketers underestimate the platform.

"It’s one of those things they tend to overlook because it’s small but I would say Tumblr is small and mighty."

« Is Visual Content the Future of Social Media? [INFOGRAPHIC]