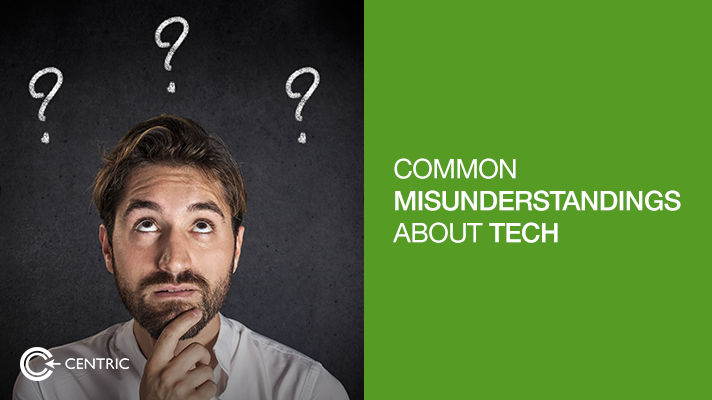 Given the positive response for 5 Misconceptions About Artificial Intelligence by centric, I decided to share the most common misunderstandings around tech that my team & I are clarifying during the initial client onboarding phase.
1. Incognito
That mode on Chrome doesn’t mean anonymous. It just means your browser isn’t actively collecting your data at that given point in time. This is one of the most common misunderstandings we come across with brand marketers.
2. Battery
There is no scientific evidence to back claims that leaving a phone on charge overnight hurts the battery. Lithium-ion batteries are smart enough to stop charging when they’ve reached capacity.
3. Camera
There is hardly any difference between an eight and a twelve-megapixel camera. Image quality depends on how much light enters the sensor, not pixels.
4. Resolution
Beyond a certain resolution, the human eye cannot discern individual pixels. So for all those people proudly touting screen resolution as the factor in the purchase of a new smartphone, relax.
5. Trash
Deleting a file from your computer doesn’t mean it’s gone. In fact, the act only deallocates the space it takes up on the hard drive. To truly delete a file, Mac users will have to choose ‘secure empty Trash’ while PC users will have to work use Sdelete to wipe all free space or specific files.
6. Microsoft
People underestimate the hardware produced by Microsoft. It’s actually really impressive and for proof check out the Surface line.
7. Apple
People think that Apple is not innovative. In our view, innovation means being able to monetize on an idea. The fact that they own 80% of the smartwatch business, says everything to refute that myth. Do the replicate the competition? Or course they do. But the game is won on execution, not ideas.
8. Facebook
People think that Facebook is a social media company. It’s actually a media and advertising company. It has a huge role to play in the media distribution business. The business monetizes on making money from users, not from connecting them with long lost friends. That’s the difference.
The article was originally published by Centric

« All You Need to Know About Social ‘Video’ Marketing!