Coca-Cola Book Bank at KLF2015 to collect books for TCF

Coca-Cola Pakistan will be enhancing its involvement with the Karachi Literature Festival this year, by setting up a Book Bank during KLF 2015 that will collect donations of books by visitors and share complimentary Coke products. All books collected during the Festival will be reviewed by The Citizens Foundation (TCF), and all books found suitable for TCF students will be taken over by the Foundation. Other books will be sold off in the market and the proceeds will also be donated to TCF. For this Book Bank activity, old glass-fronted coolers, not in use any more, will be refurbished to serve as bookshelves to collect all donated books.

With KLF 2015, Coca-Cola’s support to the festival enters its third consecutive year. The Company remains the sponsor of the KLF – Coca-Cola Prize for the best book in English language by a Pakistani author. The yearly sponsorship has also included an honorarium for the judges, and complimentary availability of the Company’s drinks for thousands of visitors to the KLF throughout its duration.

“We have absolutely no doubt that the wider spread of education and learning is a fundamental pre-requisite for Pakistan to progress and be able to counter negative forces in our society,” stated Rizwan U. Khan, General Manager of Coca-Cola, Pakistan & Afghanistan, and added: “As such, we as a company, are deeply committed to support and partner with, organizations and initiatives like the KLF and the TCF that are tirelessly working for education promotion, especially for the less privileged. I encourage you all to please vigorously support the Book Bank activity.”

Coca-Cola Pakistan has previously also sponsored the complete construction of a TCF school in flood-affected Muzaffargarh district, and is also bearing the operational costs of the school for 3 years. Its ongoing support to education also extends to the CARE Foundation and to government schools, under the Adopt-a-School programme. 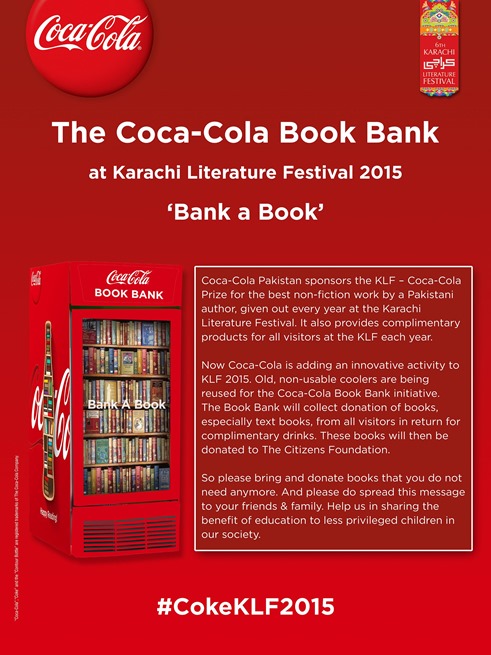