Articles
Posted By PAS
May 27 2014
0
Home Knowledge Articles Beyond the Grocery Smart Cart, the iBeacon Beckons

Beyond the Grocery Smart Cart, the iBeacon Beckons 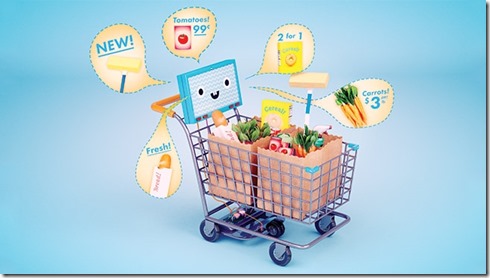 Despite e-commerce’s surge, some 90 percent of what people buy still comes out of brick-and-mortar stores. And when it comes to consumer-packaged goods, that figure is even higher. A recent study by Kantar Worldpanel predicted it may take another decade before online purchasing grabs even 10 percent of grocery purchases.

But there’s a convergence point: the marketing that goes on inside the store itself. Shopper marketing—historically little more than cardboard displays and coupon dispensers—has undergone a digital makeover.

“There’s been a huge transition of the shopper journey,” says Bob Tomei, president of IRI’s consumer and shopper marketing unit. “There are a significantly larger number of opportunities to engage with customers.”

Meanwhile, individual brands like Windex have digitized shelf-level marketing with tools like Americhip’s Video Product Replicas—display screens small enough to fit inside a product mock-up that play 30-second promotional videos. “It grabs the attention of older folks who might not have digital devices,” says Americhip marketing manager George Balolong.

At right, a wagon load of shopper tech playing at a store near you.

Chip-Activated Video
RFID chips are tiny enough to be stitched into clothing. When a shopper picks the item up, the chip hidden in a seam activates a glam-packed fashion video nearby. High-end retailers Burberry and Kate Spade are both experimenting with RFID technology. Both claim sales boosts as a result.

Smart Carts
“Intelligent” shopping carts felt like sci-fi just a few years ago, but Chaotic Moon Labs built a working prototype (fitted with a Windows 8 tablet and a Kinect module) for Whole Foods. It’ll not only scan shoppers’ groceries, but also follow them down the aisles. Meanwhile, Cisco’s MediaCart comes with a GPS-driven tablet map that helps shoppers navigate stores to find the items they want. Too bad neither of these carts can just drive home.

Micro-Location Awareness
Apple’s iBeacon uses geo-fencing to activate an app on the phone of a nearby shopper, who then receives everything from coupon offers to help finding a product. Duane Reade recently adopted the technology. Grocery chains Safeway and Giant Eagle are testing it.

Video Product Replicas
At 4 inches, video screens are now small enough that they can fit inside a mock-up that looks just like the rest of the products on the shelf—with an obvious difference. “We have sensor technology that starts the video when someone approaches,” says George Balolong of maker Americhip. A Windex replica is currently in test.

« McDonald's Unveils the Simplest Ads It's Ever Made