Out of the 12 entries shortlisted, BBDO is basking in the achievement of winning 10 AWARDS across various segments in SPIKES Asia 2014.

3 silver and 7 bronze to be precise.

The same campaign that brought the Lion home few months back , got noticed and talked about during the Spikes and won medals and accolades.

The Pakistani creatives should be proud of home talent that are now making waves globally.

Titles “NOT A BUG SPLAT”, the campaign was produced by Brave New films Culver City, USA.

The campaign generated thousands of tweets, dozens of blogs, and massive coverage in the world press spread awareness rapidly. 104 million impressions in the news and 11 million impressions on Facebook, Twitter and Instagram. The news was tweeted by members of National Assembly of Pakistan, who have raised the concern of drone strikes with the International Court of Justice. Rights activists in Yemen and the USA also picked up the campaign for their protests. And a new US Government Accountability report indicates that negative publicity is now affecting pilot morale.

Drone strikes in Pakistan have killed an estimated 3500+ people, a disturbing percentage of which have been innocent civilians. Including more than 200 children. The Foundation for Fundamental Rights has been working to raise awareness of this crisis. Drone operators routinely describe their casualties as ‘Bug Splats’ since viewing a human from far above gives the sense of an insect being crushed.

The case study video, brief, execution, objective and results can be found on:
www.spikes.asia/winners/2014/promo/entry.cfm?entryid=2278&award=4 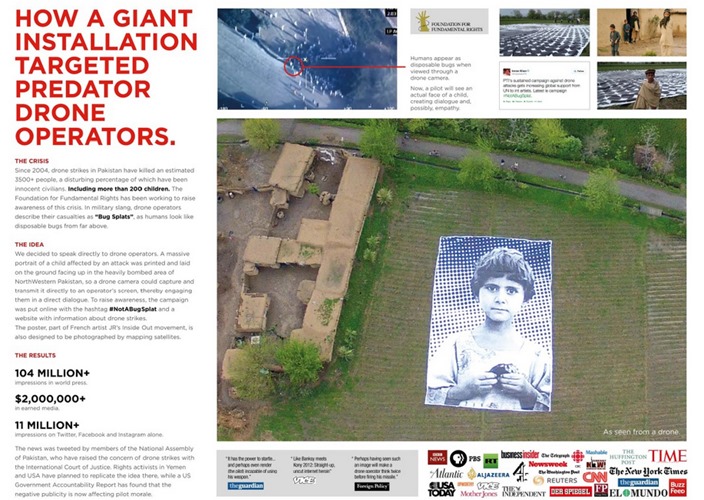