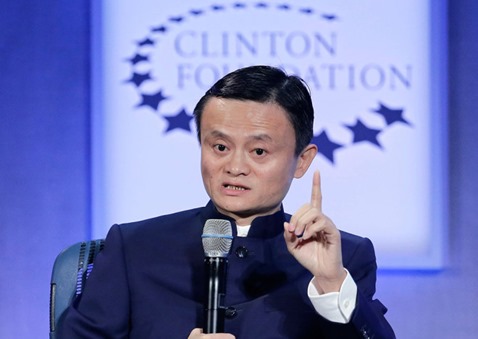 Alibaba founder Jack Ma and the Notorious BIG may seem like two very different people—OK, fine, they’re polar opposites—but on stage at the Clinton Global Initiative’s Annual Meeting in New York City on Wednesday, Ma made it clear that he shares at least one belief with the late rapper: mo’ money, mo’ problems.

As Ma told his audience, that responsibility is weighing heavily on him after his company’s record shattering IPO last week, in which the e-commerce giant raised $25 billion. “People think you can spend money better than the others,” said the newly minted richest man in China. “But I only eat three meals a day. I only use one bed.”

Alibaba’s successful U.S. IPO has led someone to wonder whether the company is readying itself for a U.S. expansion, so it can take on the likes of Amazon and Google. But as Ma himself indicates, that’s easier said than done. During his appearance in New York, he hinted that such a move may require a true strategic shift for Alibaba which, until now, has benefited from a lack of quality competition in its home country.

In a charmingly humble, and delightfully loopy conversation—at one point, Ma quoted Forrest Gump, referring to him as his “American idol”—Ma
credited much of his success at Alibaba to the small- and medium-sized businesses who buy and sell their goods on his company’s many web properties, but also to the business landscape in China, where conducting commerce can be an infrastructural nightmare.

That could be one reason why Ma says part of his strategy for growing the company is to continue expanding into developing countries—countries where approximately 6.5 billion people don’t use e-commerce today. “That’s the opportunity we could have,” he says. “We’re trying to help Nigerian SMEs sell to the Philippines and the Philippines sell to Pakistan and Pakistan sell to Argentina. If we can make that happen, that’s where the money should go.”

Ma also said he plans to reinvest the $3 billion he set aside from the IPO for philanthropy in environmental and educational projects in China to “help those who want to be successful.” He said that if he, who once made $20 a month, taught himself English, and started Alibaba out of his home, could be successful in China, then anyone could be. “I never had one day of education in the United States,” Ma proudly. “I’m 100 percent made in China.”