After Punjab, Careem and Uber banned in Karachi 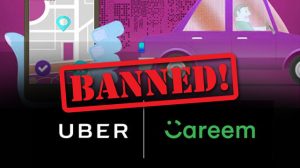 KARACHI: Ministry of Transport Sindh issued notice today (Tuesday) to ban Careem and Uber Taxi services in the province.
Ministry of transport issues notification to PTA to suspend Careem, Uber application immediately.
“Uber and Careem must take fitness certificate”, says Ministry of Transport.
The taxi services must take route permit and excise licence, says Nasir Shah.
Notification states that taxi service providers must take fitness certificate along with the route permit and excise license.
Ministry of Transport also issued a notification to PTA in order to take down the application of Careem and Uber.
Earlier this morning the Punjab government professed the services of mobile-application taxi service providers as illegal and announced that a stern action should be taken against them. The amenities being suspended included Careem, Uber and A-One taxi services.
Reports said there are hundreds of cars operated by Careem and Uber in Karachi, and between 2000 and 3000 in Lahore.
More Twitter reactions: Twitter reacts to Uber and Careem ban
Careem has said on its official Twitter handle: