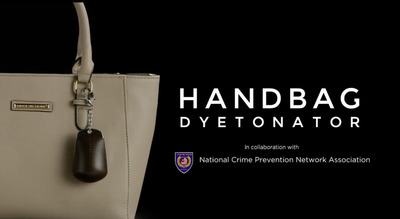 Street crime is something which is common in almost every country of the world. People will unsafe while travelling or even roaming within their native city. Although we have witnessed a decrease in street crime in Pakistan but it still exists and most of the time things stolen are never recovered.
The Malaysian company sportswear firm Ash Be Nimble has developed a technique to prevent the theft in the first place. Rather running after the thief or calling others to help, one just needs to use this detecting device to alert the surroundings that he/she has been robbed.
The Handbag Dyetonator is the world’s first device designed to mark snatch thieves after they’ve committed a crime. Masked as an inconspicuous handbag accessory, it can be remotely detonated via an SMS from any phone. It then releases coloured dye and a smoke flare, marking the thief permanently and making it easy for police to spot and apprehend him.
“We’ve always believe in empowering women and going the extra mile. We hope that the Handbag Dyetonator will act as a deterrent to snatch thieves.” says Hui Mathews, founder of Ash Be Nimble.
This handbag isn’t available in Pakistan for now but whenever introduced such a device can prove to be successful in Pakistan. It is imperative that while introducing such innovative products to a new market, communication and marketing strategy must be aligned and clear so that message is understood by the target audience.