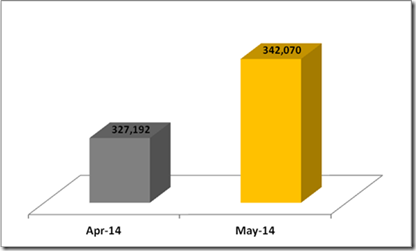 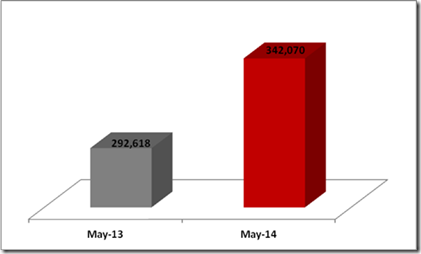 The total share of advertised minutes on TV rose by 17% this May compared to May 2013. 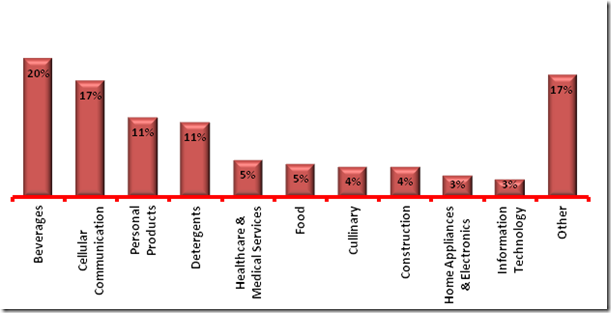 Owing to the onset of summers, beverages remain the highest spender on TV with 20% share of advertised minutes followed by cellular communication at 17%.

Comparing various entities, Unilever Pakistan advertised the most on TV during May 2014 with a total spend share of 16% followed by Qmobile. Last year top two spenders in the first 6 month’s period were Unilever and P&G.

Looking at brands, Tang advertised the most (3%) across various channels on TV. Understandably this could be a bout of spending due to summers. This is interesting to note that in just one month Tang jumped to number 1 place from 9th in April 2014. Last month the top three highest spenders on TV were Coca Cola, Pepsi and Dew.

Top 15 Channels
Across All Genre – % Share of Advt. Minutes

The channel 8xm was the top channel that attracted most advertising in May 2014, followed by ARY Digital and Khinoor at number two and three respectively. During this period in 2013, the top three channels were City42, Geo News and HUM TV.

A look at various programme segments on TV indicates entertainment being the most important genre for advertisers enjoying the share of 42%. News (40%) and music (9%) are the other two segments that advertisers prefer to advertise. Entertainment and News segments attract the major chunk of advertising with a total share of 82%. Similar advertising pattern was seen last year in 2013. 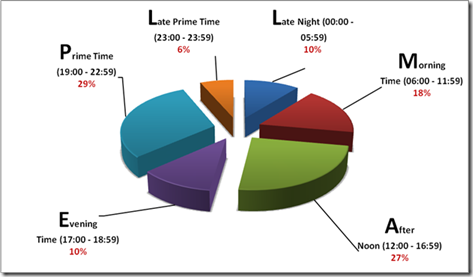 24 hours are split into 6 major time slots with Prime Time enjoying the highest share of advertising at 29% followed by Afternoon at 27% and Morning at 18%. All three combined takes the 74% of total advertising minutes’ share.