1. In April, the total minutes of advertising dropped by 4 % compared to March, 2015. This could be owing to pre-ramazan period where most major brands halt their advertising in anticipation of augmenting them during Ramazan-eid season.

2. Interestingly, comparing to the last year trend of the same period, there has been a growth of 21% in the total minutes of advertising.

4. Unilever tops the list of most advertised company on TV. Alone it enjoys a share of 17% which is a cumulative of the other three (Pepsico, P&G and Coca Cola).

5. The top three brands that advertised the most on TV remain Pepsi, Dew and Coke, owing to summer season.

6. News One tops the list of top TV channels getting the most advertising. This applies to prime time slot of 7pm to 11pm.

7. News and entertainment remain the most preferred segments for advertising with religious, sports and health programmes attracting the least advertising.

8. The top three time slots for advertising include 7pm to 11pm and 12 noon to 5pm followed by morning slot of 6am to noon. 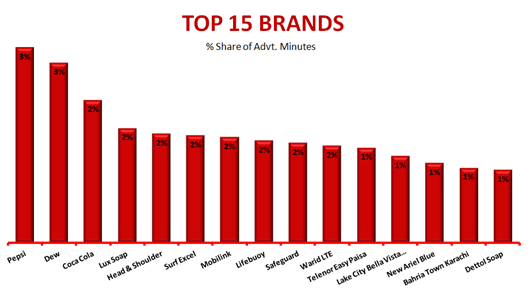