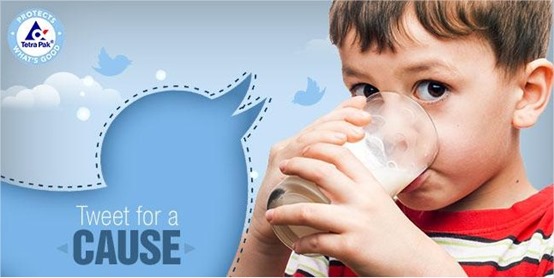 Tetra Pak recently launched a campaign asking people to #MilkItUp during the month of Ramadan with the use of the hash tag and the social platform of twitter.

All people needed to do was tweet with #MilkItUp and for every tweet, Tetra Pak donated 250 ML milk box to the SOS Children’s Villages.

The campaign itself is now over and was able to round up 252,500 ml of milk for the SOS Children’s Villages.

The agency behind this campaign was Bramerz Pakistan.

Some of the tweets are:

Have you tweeted with #TetraPak to give the kids at SOS Village a healthy dose of milk this #Ramadan? #MilkItUp

Use the hashtag #MilkItUp to donate milk.

Donate 250ML of Milk to SOS Children's Village! Just tweet with hashtag #MilkItUp :) Thank you #TetraPak for this pic.twitter.com/aRa44fS2nB

Let's help poor kids! Gift them a pack of milk by just tweeting. One tweet is equal to 250ml milk. #TetraPak #MilkItUp

« Whatsapp Urdu Is Going to Be Available Very Soon