Singapore blog Temasek Review has come under fire on social media for posting a fake ad for Malaysia Airlines that mocks the missing MH370 plane. 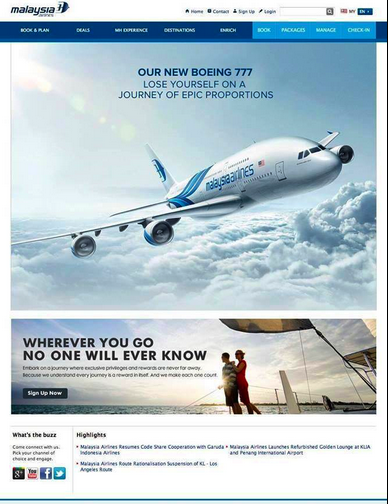 The ad for a new Boeing 777 reads ‘Lose yourself on a journey of epic proportions’. Beneath a picture of the plane is the slogan, ‘Wherever you go no one will ever know’.
Temasek Review, which promotes itself as the “top alternative online news website in Singapore”, asked its readers for comments by the post, with the words “captions please”.
TR posts The mock ad has received much criticism on Temasek Review’s Facebook page for being insensitive. One poster called the image “sickening” while another accused the Temasek Review of being an “attention whore”.
Most brands have being careful in their approach to the MH370 mystery. McDonald’s was among a number of brands to withdraw advertising in Malaysia in respect of the tragedy, canceling today’s ‘National Breakfast Day’ promotion.

« ‘Peshawari Chappal’ Makes its Way into the European Market