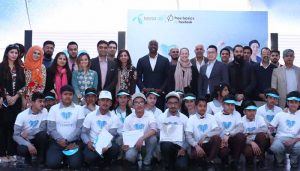 Telenor Pakistan and Facebook have launched the second installment of its knowledge-based initiative Internet Champion – iChamp, which includes a nationwide competition for school children and a reality show on national TV this year. The launching ceremony, held at a private school in Rawalpindi, was attended by top management of Telenor Pakistan and Facebook.
iChamp 2017’s goal is to touch secondary schools on a mass scale across Pakistan to educate youth on the benefits and safe use of internet. The program will be supported by Facebook’s Free Basics project that provides free access to dozens of fun and learning websites. Covering 76 districts across all four provinces, Gilgit Baltistan and Azad Kashmir, an estimated 600,000 students will be trained by experts through Free Basics with free handbooks and other resources.
In the program’s first phase, iChamp trainings and competitions covering responsible and positive use of internet will be held at over 1,600 schools nationwide, with three students from each school shortlisted for the district-level competition. In the second phase, a district-level competition will be held at the district HQ’s main school with all winning students from each school participating and three being shortlisted for the provincial level competition. The third phase will feature a provincial level competition to be held at the respective provincial capital where the district-level winners will compete and only three winners will be selected from each province.
The selected 12 students will proceed to compete in the iChamp reality show on national TV. This will be the first and the biggest show of its kind where students from across Pakistan will converge to support Telenor’s cause of digital inclusion and facilitating learning through mobile internet. The 15-episode reality show will feature competitions based on using internet productively and a grand finale where the ultimate iChamp will be announced. The show will also be powered by Free Basics with contenders looking for the right answers on their mobile phones and thus promoting the use of cellular internet for education and learning.
“It feels great to be back with the second, bigger and better installment of our Internet Champion program,” said Irfan Wahab Khan, CEO, Telenor Pakistan. “Children are the future of our country and we at Telenor Pakistan are ready to go the extra mile to support and empower our youth.