Retail e-commerce sales in the country will rise by more than $3 billion this year, according to eMarketer’s latest estimates, reaching a total of $42.46 billion.
Overall retail sales in France—excluding travel and event tickets—rose 1.4% in 2016, eMarketer estimates, but will grow only half as fast this year as more people buy digitally
The estimates are part of a recent eMarketer report on the French market. (Subscribers to eMarketer PRO can access the full report here.
France’s economy—the third largest in Europe—has been struggling for several years, experiencing poor growth, budget deficits and relatively high unemployment, especially among young adults. However, the election of Emmanuel Macron as president in May 2017 and his party’s strong showing in parliamentary elections have boosted consumer and business confidence, signalling an improving outlook. 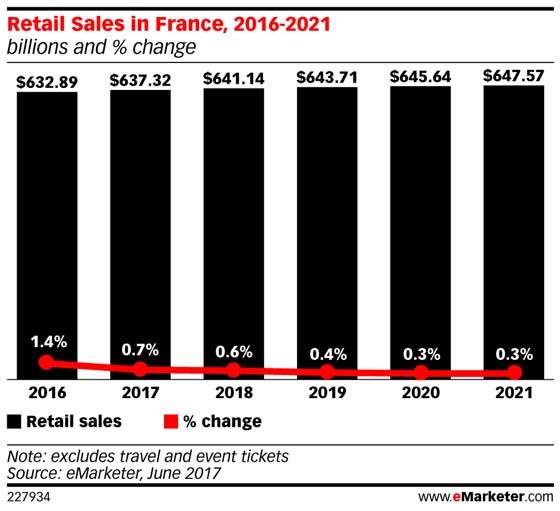 That said, Macron faces an uphill battle to implement many of his campaign promises, which include sweeping reforms of pensions, working conditions and military budgets.
According to the International Monetary Fund (IMF), GDP in France rose by 1.3% last year, compared with 1.7% in Germany and 2.0% in the UK. The same growth rate is expected for this year, though an increase of 1.6% is predicted in 2018.
eMarketer expects consistent increments in online business spending through 2021 as computerized purchasing turns out to be considerably more across the board. Customers in France who as of now purchase carefully on digital medium have a tendency to spend more on their online buys, and are probably going to purchase more frequently; normal spending per purchaser is rising. Along these lines, sales will exceed in the number of digital buyers. 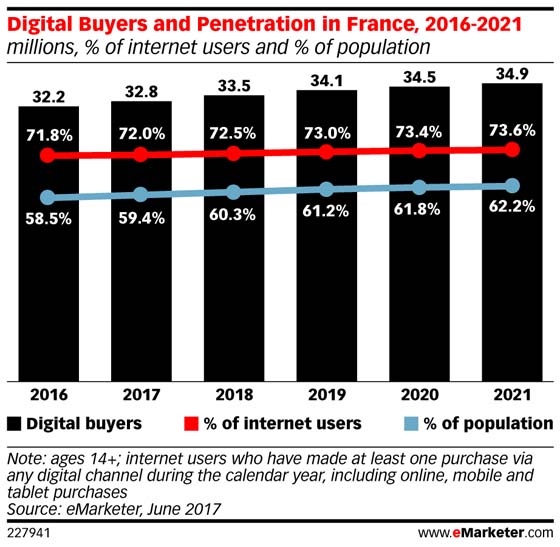 Internet business will keep on claiming an ever-more prominent offer of aggregate retail deals, at 6.7% of every 2017. This share falls well beneath local levels; crosswise over Western Europe, 8.8% of all retail deals will originate from advanced buys this year, eMarketer gauges.
Some 32.8 million individuals in France ages 14 and older will make at least one purchase via any digital channel in 2017. That number will rise slowly throughout the forecast period and approach 35 million by the end of 2021. By that time, an estimated 62.2% of the population will purchase goods or services online.