Apple Honors Robin Williams with Tribute Page at their Website 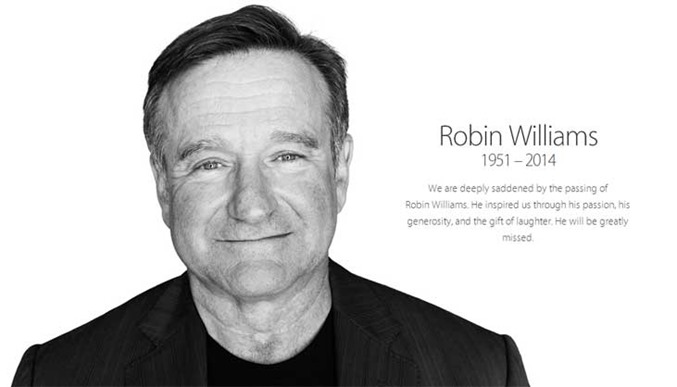 Late American actor and comedian Robin Williams (1951—2014) will be remembered around the world for a number of reasons: his dynamic personality, the uncanny comedic prowess he emanated during his performances, and the liveliness which he poured into every role he played regardless of the media channel.

The news of Williams’ apparent suicide was received with shock by everyone familiar with the name but Apple Inc., as a corporate entity, can relate to the loss because its recent TV ads campaign “Your Verse” was envisioned around the catchy monologue verbalized by the legendary actor’s role in the film “Dead Poets Society”. The original TV ad, meant to promote iPad and its usage for specialized purposes, featured the monologue in Robin’s own voice, and was well-received for the message and creativity:

Apple is, therefore, paying homage to the actor and stand-up comedian in the form of a rare dedicated page which lists a mourning statement alongside a monochrome photograph of the actor:

“We are deeply saddened by the passing of Robin Williams. He inspired us through his passion, his generosity, and the gift of laughter. He will be greatly missed.”

Other famous people who were previously paid a similar tribute by Apple include the politician and leader Nelson Mandela, activist Rosa Parks, Apple CEO Steve Jobs, and Apple board member Jerry York.