The race for creating an alternate reality

Augmented Reality and Virtual Reality technologies have been around for few years now. But till recently, applications and users for these have been limited. But now with Google, Facebook and Apple adopting these technologies, the scale is about to become big. I should add, it’s more AR than VR for now. So, what exactly are they offering in AR? 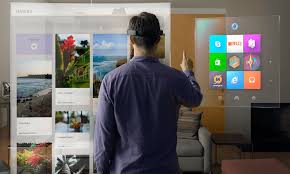 Facebook
Apart from the ‘primitive features’ as Mark Zuckerberg referred to as the current AR offerings such as overlay objects, filters and animations, Facebook has ambitions to take AR to a far more sophisticated level. A glimpse into this future was revealed at F8’17. AR glasses, a kind of futuristic lenses that can overlay digital text and images onto the physical world around you. Market feedback for Google Glass will definitely play into the development process. But for now, Facebook has launched ‘Camera Effects Platform’ where developers are invited to build AR features for in-app camera across Facebook, Instagram, Messenger and WhatsApp. Now that’s the sort of scale required to make AR mainstream.
Google
When it comes to scale, Google can’t be left out. Google Tango when launched – there was limited scale because of the requirement for specific hardware. But Google Lens that was announced in I/O ‘17 will be compatible with your everyday smartphone. Paired with Google Map and Google Places, it can offer you contextual information just by pointing your smartphone camera to the object – be it a museum art or a restaurant signage. It’s still in the development stage but already discussions are on as to how this will impact SEO world.
Apple
At WWDC ‘17, Apple announced their AR initiative. The new iPhone 8 will be AR ready with multiple depth sensing cameras that have enhanced localization capability. It will capture detailed data about the environment which enables the phone to identify and actively react to objects nearby. With ARKit – developers can create their own AR features for all iPhone users, all 700Million* of them! (*as per some published reports).
Market is already responding with many AR applications at different stages of development; from virtual salons that let you see how the make-up looks without having to apply it to smart glasses for blind people that send a video feed to customer-service agent to relay details of the surroundings.
Via: Centric