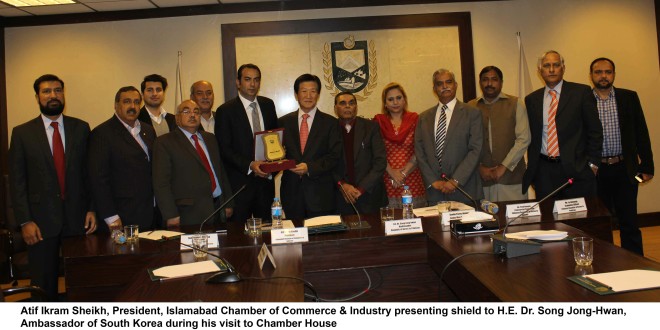 The information technology park would be constructed in the Chak Shahzad area of Islamabad at a cost of $88.383 million (Rs 9.2 billion) including loan of $76.3 million from Korean Exim Bank under the Economic Development Co-operation Framework (EDCF) arrangement. It may be mentioned that EDCF arrangement worth $500 million was signed with Korea in October 2015.
The IT park would be spread over an area of 45 acres, and provide half a million sq ft of office space for 5,000 knowledge workers. It would house an incubation center for start ups, a data center, and allied facilities in day care centers, gyms, and sports facilities.
The Korean Ambassador said that bilateral trade between Pakistan and Korea had declined by almost 34 percent during the last three years which should be a cause of serious concern for both sides. He termed non-availability of trade related information and lack of understanding about promising areas of cooperation as major reasons of low trade volume. However, he said that Pakistan and Korea have started the process of free trade agreement feasibility study of which would be completed by end of June this year and added that both sides were expecting big jump in bilateral trade once the FTA was signed.
He said Korea was cooperating with Pakistan in energy sector and added that Korean Importers Association (KOIMA) was looking for partners to import thousands of tons per month good quality copper ore from Pakistan. He said that tremendous untapped possibilities of mutual cooperation existed between Pakistan and Korea and assured that his Embassy would provide all possible cooperation to exploit such opportunities.