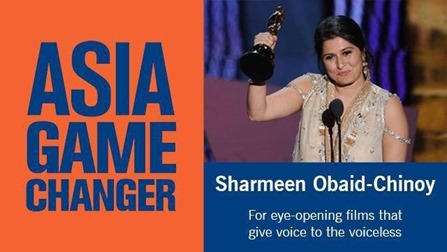 SOC Films announced that Sharmeen Obaid Chinoy was named by Asia Society as a 2014 Asia Game Changer. The award recognizes those making a transformative and positive difference for the future of Asia and the world.

Sharmeen Obaid Chinoy was recognized for eye-opening films that give voice to the voiceless.

“Filmmaking is my way highlighting issues that affect marginalized populations who are caught in difficult circumstances,” said Sharmeen Obaid Chinoy. “By giving a voice to those silenced by society and bringing their stories to television screens around the world, I hope to bring about change in communities.”

“The Asia Game Changer Awards are designed to fill a glaring gap—a lack of recognition of people who are transforming ideas into action and improving lives in Asia,” said Asia Society President Josette Sheeran. “Our inaugural honorees represent an extraordinary range of geography and achievement. What they share in common are vision, passion and proven impact, wherever and however they happen to be changing the world.”

Honorees were selected based on input from Asia Society’s global network. The other 2014 Awardees are:

Shigeru Ban, Founder, Shigeru Ban Architects, For finding beauty, and hope, in the landscapes of disaster

Madhav Chavan, Co-Founder and CEO, Pratham Charitable Trust, For bringing the gift of literacy to millions of Indians

Illac Diaz, Founder, MyShelter Foundation and Liter of Light, For bringing light, literally, to so many lives

Fashion Girls for Humanity, For demonstrating that ‘looking good’ and ‘doing good’ can be one and the same

Kuntoro Mangkusubroto, Minister and Senior Advisor to the Indonesian President, For providing a brilliant blueprint for responding to disaster

Playing for Change, For using the power of music to spread a global message of hope

Pawan Sinha, Professor, Department of Brain and Cognitive Sciences at MIT, For a truly visionary approach to treating India’s blind

Malala Yousafzai, Education activist, For continuing to dream, and fight for girls the world over, after living a nightmare

The honorees will attend the Asia Game Changer Awards Dinner and Celebration at the United Nations on October 16, 2014. Jack Ma, named Asia Game Changer of the Year, will give an address to the gathering.  The evening will also feature a special video address from Malala Yousafzai and a live performance by Playing For Change.

More information about the awardees, including bios, and the October 16 event is available at AsiaSociety.org/GameChangers.