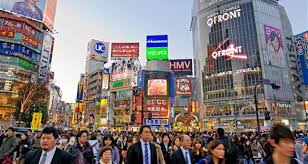 Japan’s marketing industry shows anomaly by displaying positive trends and predictions!
People around the world have adapted themselves in seeing Japan’s economy going down. But recently we haved observed a positive ray of hope in Japan as the economy has expanded for six quarters in a row, most recently posting an annualized growth rate of 4%. The government cites increased private consumption (up 5.3 percent year-on-year) as the driver.
However, we see cloud throwing shadow worldwide. Typically a trusty gauge of economic situations, Dentsu this month cut its income and benefit estimates for the year, indicating the reassessment of worldwide showcasing spend by customers in divisions, for example, consumer packaged goods (CPG). The FMCG division alone records for around 10% of worldwide income for huge promotion organization system.
P&G has decreased it’s overall adspend to a level that it has hit down to minimum most ad-spend in 11 years with US$7.1 billion due to lack of transparency and brand safety issues in the digital space. Unilever on the other hadn is planning to reduce its number of agencies to almost half and cut down adspend by 30%.
FMCG companies are struggling globally, says Greg Paull, principal of consultancy R3. Paull notes that 90 of the top 100 CPG brands lost market share last year. He points to an “Amazonification of the old ecosystem” which means consumers everywhere either want to pay less or receive something “special”. The rapid growth of e-commerce in Japan has made brand loyalty a major issue in the market. “With depleted revenues, marketing is often one of the first costs to be cut,” Paull says.
That may not happen in Japan though—at least yet. Dentsu emphasised the impact of client spending cuts on its international—rather than domestic—business. In its recent H1 financial report, ADK showed a year-on-year decrease in cosmetics and toiletry client billings, but respective increases of 26 percent and 8 percent in household goods and food sector spending.
At a conference that Campaign hosted with The Trade Desk in Tokyo in July, Aco Yamagata, a media director at Unilever in Tokyo, expressed doubt over the benefits of investing heavily in growing areas like programmatic technology. She speculated that client spending on programmatic in Japan is likely to experience a temporary decline due to factors such as a lack of expertise among marketers and difficulty demonstrating ROI. But she says Unilever does not plan to reduce overall marketing spend. “Our business is good and stable, so there is no need to decrease our investment,” she says, but adds that “premiumisation and customisation may be the direction we need to go.”
Noriyuki Endo, a spokesperson for P&G in Japan says “Japan’s recent economic growth “affirms our view that there are growth opportunities in Japan”. Again, as Paull indicated, the future appears to be in offering premium products. Endo says P&G expects the country’s discerning consumers to continue to look for innovation and better solutions to their daily chores, and be willing to pay a premium for it.
“We continue to observe this reality in how consumer goods categories like baby diapers and laundry are still growing despite decreasing trends in population,” Endo notes.
Consumer research offers further encouragement. Nielsen’s most recent shopper certainty record demonstrated that while certainty ascended in 9 out of 14 showcases in Asia-Pacific, Japan saw one of the greatest bounces, with certainty up 13 focuses. Internationally, Japan positions 33rd out of 63 nations with a certainty score of 87 (still beneath the worldwide normal of 104).
All things considered, it appears to be savvy to be careful. In a week after week examination of Japan financial aspects dated 18 August, Deutsche Bank recommends things may have topped. It predicts that administration work style changes will smother financial development, with the rate easing back to an annualized 0.7 percent in Q3. It sees private utilization development tumbling from 1.4 percent in 2017 to 0.6 percent in 2018.
Via: campaign asia